The irony of this title amuses me greatly, which I am guessing is a good thing. Just as all of those bloggers who attended friends for life, like myself are still processing things, so too am I. I will give you my week at a glance though. The chances of me going further into details of certain things at this time may or may not happen. This is just because there is so much to process, but at the same time others will be rehashing the exact same thoughts as I will be. Even though these events are coming from a different perspective, one can only read about the same thing so many times before you get bored out of your mind. I know I would.

I flew down last Monday, July 2nd from EWR to MCO. The flight was relatively uneventful, which was nice. I mean my Dexcom most likely set off the alarm, which I am used to, so I was patted down. Honestly, this time was probably one of the best pat downs in like forever. The first few I had, were kinda awkward, but as time has moved on they have been less touchy and kinder or I am just used to people .... that is going to go dirty. Well probably to late, so I am going to stop. I alarmed, said I have a pump, they gave me a pat down and hand wipe, sent me on my way. I chilled in the airport, ran into someone from my parish, chatted, flew to Orlando.

I found my bags and went to pickup my rental. I was tired. I got screwed over by the rental agent from Avis who signed me up for liability insurance that I never wanted. This fight with Avis is still pending. No matter the case, I will not be renting from them EVER again. Deceitful, lying practices by the agent cost me $100 that I had not budgeted for on this trip. Later on this afternoon, I will be flipping my own switch on them. (Starting nice of course).

Following the rental I went and checked in at my hotel. Old Key West (I have a time share, so it was a "free" room for the week.) That was easy. Only if all businesses took their cue from Disney, the world would be a better place. You hear me Avis?? It was about 1:00 in the afternoon so I headed over to the Magic Kingdom for a little fun and wanted to get my hands on a GAC card. The process took a while, I did not get the full access I was hoping for, but I got a card to wait in a shaded waiting area if nothing else. This was not worth the fight, there are other parks to visit and attempts to be had.

I Jungle Cruised it for awhile, why? I love that ride and corny jokes. I got some Ice Cream as I was dipping low. I headed to Hollywood Studios for some fun. At Hollywood Studios I figured I would try my luck again at the GAC card that had the alternate entrance option. I seem to always have luck at this place. This time fate was at my side. I wandered into the entrance and was waiting for the next available person. The agent came up to me and was all like, "what can I do for you?" I told her that I needed a GAC card. She asked how long I was at the parks for and how many people, and disappeared. I found that weird since I never even had to give the Diabetes spiel. She came back with the magic card I was hoping for and I wandered off, still a little confused. That is when it dawned on me. While I was waiting to be seen, I was standing next to a grandma age person in a wheel chair. I can only assume that the person thought this was my grandma and gave me the card without any questions. (She must have been really confused when I left leaving my "grandmother" to somebody elses care.) Whoops.

I had dinner with friends and just hugged and relaxed. AWESOME day.

Tuesday, I met up with people for breakfast. Dayle, gave me a big hug and said "Hi, I'm Dayle". Mind you we had never met in person, but well I could figure out who she was based on Hangouts. Tuesday was awesome. I had a chance to see all of my friends who I had been missing big time and hug others whom I had never met. A group of us recorded a podcast with Chris. That was fun. Long day. Awesome though.

Wednesday, I woke up and had to meet with the people over at Tandem Diabetes, for a pump demo. I will talk more about this in a different post to give you my thoughts and comments. Following that I was waiting for Sara to pull herself together. I did some d-art instead with Lee Ann Thill. We were given art supplies based on pump bits and pieces, infusion sets, tape, glue, glitter. Awesome.  So I made my d-art creature. 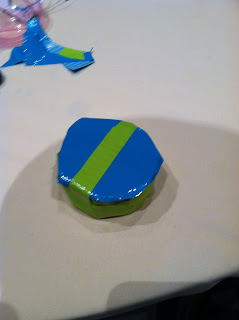 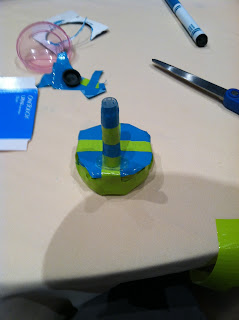 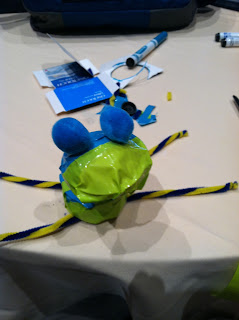 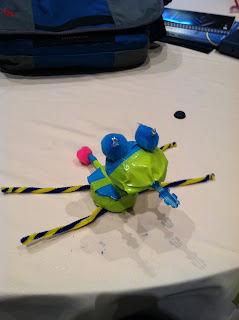 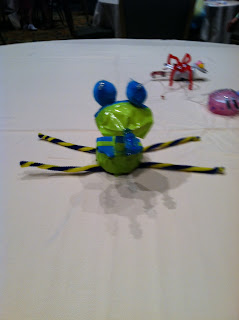 Who knew I had that kinda art talent?!? No me. I was just being patient. It was a fun day. Sara and I headed over to Hollywood Studios again, rode the rides we wanted, had fun. It rained all over us, so stops were made to change clothes and such. It was a great day. Oh I also played some awesome basketball with Scott Johnson and Rick Philbin.

Thursday, the conference started as it was supposed to. The opening Keynote by Tom Karlya. He had many great things to say. The morning was SOOO worth it. The rest of the day is kinda a bit of a blur. I know I sat through some sessions which were good. I was really just excited to see my friends and just be able to talk and deal with all the beeps, clicks, whistles, and all other noises my pump and other peoples pumps made. My room has been kinda quiet the past few days. Sad on some level, but I haven't had to grab my Dexcom and be all like damn, that wasn't mine. The night ended with 16 + of us going to see Spiderman! AWESOME!

Friday was a repeat of Thursday, however we did setup the You Can Do This Booth. As others have said, I am not really going into this all that much, right now. I am waiting for Kimpants to talk about this more before I talk about the experience at the booth. Most of the afternoon was spent at the booth, but also looking for some awesome swag as well.

Saturday was a repeat of Friday at the You Can Do This Booth, plus more time with my amazing friends. I really needed this trip. I did find out on Saturday my pump warranty is shot and well my pump is starting to go on me. So of course I am not even close to being prepared to figure out what I am doing pump wise. That conversation will show up on Thursday/Friday.

Sunday I came home. Happier and sadder than I when I came down to Florida. Friends for Life was awesome, worth it, and fun. Something all people with D, whether newly diagnosed, young, or 20+ years with the D. The time with others is so key to vent, to bitch, and just be normal, without the questions of "Can you eat this?"
Posted by Brian at 1:11 PM